All the Horses of Iceland

The audiobook, courtesy of Tantor Media is available from

Everyone knows of the horses of Iceland, wild, and small, and free, but few have heard their story. Sarah Tolmie’s All the Horses of Iceland weaves their mystical origin into a saga for the modern age. Filled with the magic and darkened whispers of a people on the cusp of major cultural change, All the Horses of Iceland tells the tale of a Norse trader on the Silk Road and the ghostly magic that followed him home to the land of fire, stone, and ice. His search for riches will take him from Helmgard, through Khazaria, to the steppes of Mongolia, where he will barter for horses and return with much, much more.

An interview of Sarah Tolmie by Bryn Hammond about All the Horses of Iceland is published on The Great Raven website. 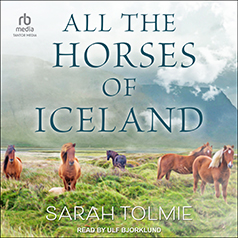 All the Horses of Iceland has been released as an audiobook, narrated by Swedish actor Ulf Bjorklund. Its run time is 2 hours 20 minutes. For more information and to buy the audiobook, visit Tantor Media.

Here is an MP3 audio sample, courtesy of Tantor Media:

Sarah Tolmie’s All the Horses of Iceland (Tordotcom, 111 pp., paper, $15.99) is a slim and beautiful chronicle that reminded me of Naomi Mitchison’s “Travel Light”; a medieval Christian scholar named Jor relates the marvelous history of a nameless white mare from whom all of Iceland’s horses are descended, and the no-nonsense Icelander, Eyvind of Eyri, who traveled to Mongolia to find her.

Eyvind is far from home, intending to sail from Scandinavia to Greece on a merchant vessel and seek his fortune. But when the captain makes Christian conversion a condition of the venture, Eyvind refuses, and instead joins the party of a Jewish Khazar named David, bound far inland to the steppes of Central Asia to trade with a Khan. Once there, Eyvind learns that the Khan’s encampment is plagued by a ghost — and it has been prophesied that someone fitting Eyvind’s description will banish it. While Eyvind protests that he is no magician, only he seems able to see and hear the mysterious white mare, and to acknowledge that she has some connection to the ghost.

Everything about this book is understated, writ small: the length and breadth of a journey through war-torn territory, the wonder of learning new languages and technologies through trade and hospitality, the sheer unlikeliness of caring for and working with horses. Tolmie — both a medievalist and professed horse person — brings a scholarly precision to her fantasy that makes magic mundane and the mundane utterly sublime. The simple fact of honest men doing their best, discussing customs, names, religions and opinions with genuine curiosity, is deeply refreshing, a kind of grace.

[T]he clever All the Horses of Iceland has a charm uniquely its own. Based in folklore and rigorously researched history, it will be especially appreciated by lovers of Nordic legends and those openminded enough to learn a bit about eastern Europe and western Asia in the era portrayed.

[T]he overall style is at once poetic and sparse, and at times extraordinarily graceful. Although relatively little of the story is set in Iceland itself, it manages to evoke the hypnotic rhythms of the Eddas, and it gracefully balances its meticulous historical detail with a strange and sweeping sense of legend.