Sarah Tolmie reads from The Little Animals as part of the the University of Waterloo’s Institute for Complexity and Innovation (WICI)’s Virtual Book Club. After the reading, WICI graduate student respondents across a range of disciplines will give five-minute talks, reading aspects of the novel from the diverse perspectives of their research. The event will conclude with an open Q & A session with the author and graduate student readers.

Register in advance via Zoom.

Sarah Tolmie will be reading from her new novella All the Horses of Iceland, a saga set in ninth-century Iceland and Mongolia, at a virtual launch hosted by Toronto’s Bakka Phoenix Bookstore. The reading will be followed by a Q and A hosted by SFF blogger James Nicoll. 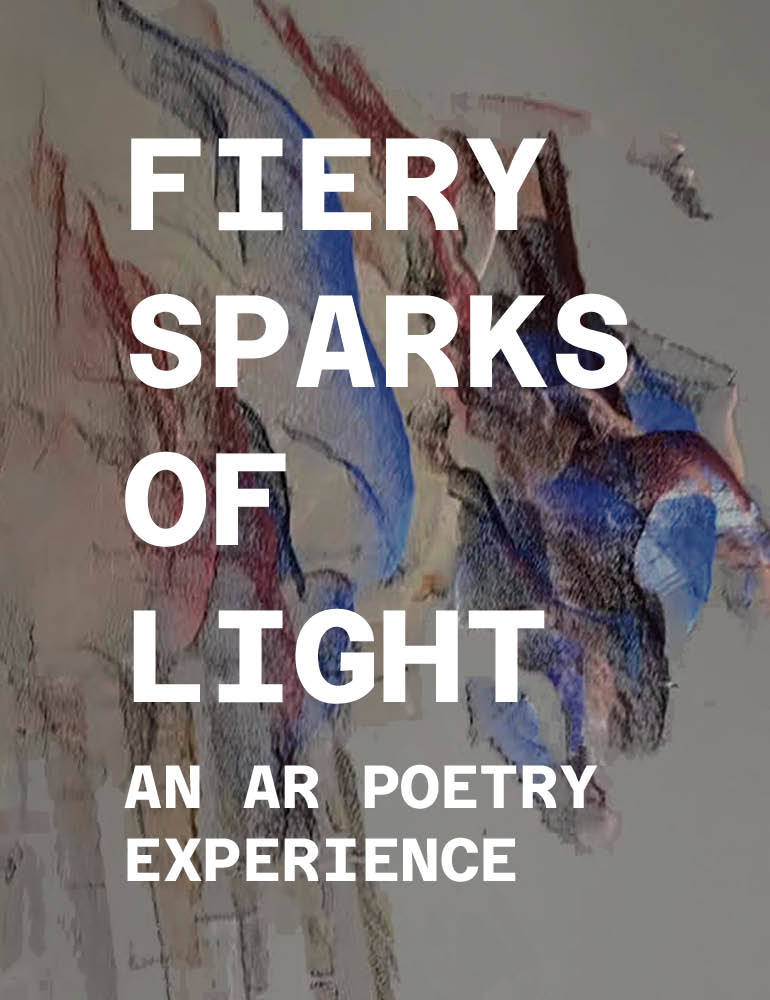 Sarah Tolmie is one of four Canadian women poets (along with Margaret Atwood, Nicole Brossard, and Canisia Lubrin) selected to perform in Fiery Sparks of Light, an augmented reality poetry display that forms part of Canada’s guest of honour program at the 2021 Frankfurt Book Fair (20–24 October 2021). Produced with the participation of Telefilm Canada, Fiery Sparks of Light is a CFC Media Lab and York University Immersive Storytelling Lab co-production, in partnership with The Griffin Trust for Excellence In Poetry, and supported by OCAD University.

A PDF excerpt from the book is available from the Canadian Film Centre; scan the the QR codes in the PDF using the free Fiery Sparks of Light app (iOS / Android), and watch a preview of the AR performances. An instructional video shows you how to use the app.

Sarah Tolmie and Mary Germaine do a joint reading, Hosted by the Department of English, University of New Brunswick. Register for this event at Eventbrite.

Sarah Tolmie and Tanis MacDonald read from their latest poetry collections (Sarah Tolmie, Check [McGill-Queen’s UP, 2020] and Tanis MacDonald, Mobile [Book*hug Press, 2019]). Each poet will read first from her work, and then from each other’s. There will be a Q & A moderated by Laurie Graham (poet and editor at Brick Books), and a chance for participants to win either of the books by reading one poem aloud.

Supported by the League of Canadian Poets.

Sarah Tolmie reads from Check in a joint reading with Tanis MacDonald, hosted by KFB SAL|ONline. For details about how to participate, see the knife | fork | book site.

Sarah Tolmie reads from The Little Animals in the Chiaroscuro Reading Series. The other readers are Elyse Friedman and Robin Richardson

Tickets ($20) are available from the Royal Conservatory box office.

The Word on the Street

Sarah Tolmie reads from The Art of Dying at a session entitled “Observational Poetry,” together with Dani Couture.

Sarah Tolmie reads from The Art of Dying as part of the Art Bar Reading Series.

Reading at the Atwater Poetry Project

Sarah Tolmie reads from The Art of Dying, along with Pamela Mordecai.

Sarah Tolmie reads from The Art of Dying at the 2018 Iceland Writers Retreat.

On Poetry and Complexity

This event resulted in an article, jointly authored by Madhur Anand, Rae Armantrout, Roald Hoffman, Sarah Tolmie, and Osheen Harruthoonyan, entitled “On Poetry and Complexity: A Conversation at the Interface of Art and Science,” Rungh.org.

Sarah Tolmie reads from The Art of Dying.

The musical setting of poems from Trio by Erica de la Cruz, winner of the Trio Prize, will be performed as part of Conrad Grebel University College’s Noon Hour Concert Series.

Also on the program are Seven Tableaux from the Song of Songs by Srul Irving Glick. (more information)

Joint launch of Trio, by Sarah Tolmie, and Tablature, by Bruce Whiteman, both in this year’s Hugh MacLennan Poetry Series by McGill-Queen’s University Press.

A reading from Trio by Sarah Tolmie, and the presentation of the Trio Prize to Erica de la Cruz, winner of a competition for a musical setting of a sonnet from Trio.

Baseline Press launches its 2014 chapbooks with readings by poets Darren Bifford (Hermit Crab), Sarah Burgoyne (Love the Sacred Raisin Cakes), Jeffery Donaldson (Slack Action: A Poem), Debra Franke (Where the Back Roads Take You) and Sarah Tolmie (Sonnet in a Blue Dress and Other Poems).

Baseline Press launches its 2014 chapbooks with readings by poets Darren Bifford (Hermit Crab), Sarah Burgoyne (Love the Sacred Raisin Cakes), Jeffery Donaldson (Slack Action: A Poem), Debra Franke (Where the Back Roads Take You) and Sarah Tolmie (Sonnet in a Blue Dress and Other Poems).

Sarah Tolmie reads from NoFood at the Chiaroscuro Reading Series.

A reading from The Stone Boatmen at the 38th annual WisCon, presented as part of “Renaissances” with Aqueduct Press authors Eleanor Arneson, Nancy Jane Moore, and Jennifer Marie Brissett.

Reading from The Stone Boatmen

Followed by Q & A; refreshments will be served.

Writing in the ’Loo

With Suzanne Church and Jaz Ashton.